Being in New York City for a few months to intern before traveling overseas again, I couldn’t miss the opportunity to visit Four Seasons New York. The 52 story hotel is the only IM Pei designed hotel in the western hemisphere!

Walking into the hotel, you’ll be greeted with an impressive limestone interior. And to your right is the Garden Restaurant.

The Garden is decorated with African acacia trees and though there were lots of people during the lunch hours, it felt relaxing compared to the fast moving city streets outside.

Milton, who served us, was super friendly and answered all of our questions. Including the fact that the leaves on the acacia trees aren’t actually real. 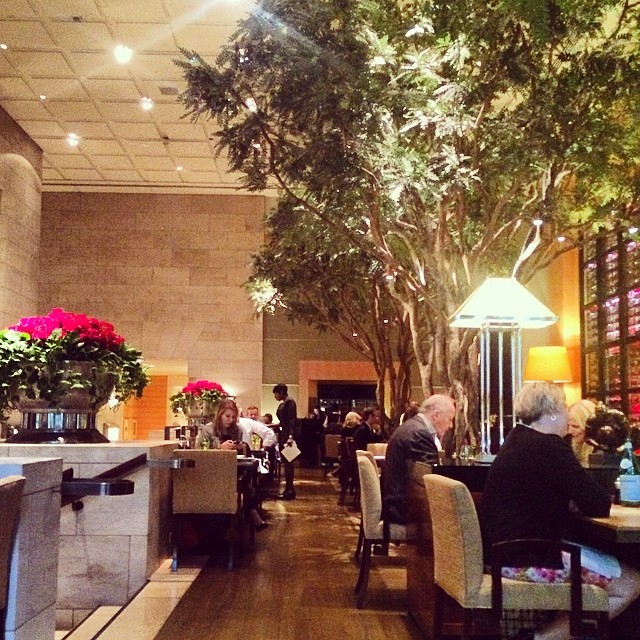 He also told us that the chef tries to use only ingredients within a 100 mile radius of the city. Even the ketchup that came with my brother’s ahi tuna burger was from the area!

Before arriving at the hotel, I had my mind set on ordering the Garden’s “Fortunately” 500, a 500 calorie lunch of kale salad, branzino and blueberry sorbet. When I got to the restaurant though, I found  I wanted to try everything!

So my mom ordered the Fortunately 500 and I settled with local kale salad and salmon.

The food was delicious, healthy and for me, the perfect portion size. The day before, I was so excited and tweeted Four Seasons New York. They wrote back saying they had a surprise waiting.

So after we ate, I was surprised with some desserts! And the cheesecake, cookies and hazelnut napoleon was a perfect ending to my birthday lunch at the Garden Restaurant.