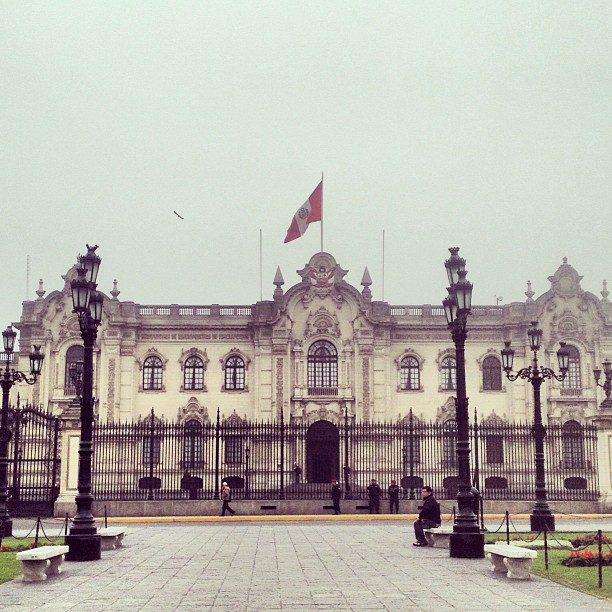 Lima Peru was where our overland tour ended from Rio de Janeiro Brazil, meaning we took a long road trip all the way from Brazil through Paraguay, Bolivia and finally Peru. It took a total of 46 days.

My brother and I sat towards the back of the overland truck, shown below, where there was a bookshelf filled with guidebooks and also some other random fiction novels.

A Vine video I shot while driving into Lima:

We arrived in the evening and since it was our last night with our tour group that we had been traveling with for more than a month, we had a farewell dinner at Tanta Restaurant, a restaurant opened by Peruvian chef Gastón Acurio that serves Peruvian dishes. Apparently, there’s a Tanta in Chicago as well!

The next day was August 20, the exact day I started my business two years prior. We started the day early by walking to Lima’s Chinatown. Because it was so early, there weren’t too many stores opened.

Then we walked to the gastronomy museum. The museum is in what used to be an old post office. Now, the building is used as a museum to show the history of Peruvian gastronomy.

There’s also this picture of the Last Supper, with cuy (guinea pig)!

Next, we met up with some of our tour group members to see the changing of the guards in Plaza Mayor, where Peru’s Presidential building is located. There were guards inside and also outside of the gate, making sure that spectators didn’t go too close to the gate.

Here’s a Vine video that captured some of the music that the band was playing:

Afterwards, our group decided to go to a cafe and talk before parting. While walking in a square just a few minutes walk away from the main square, where the Tanta Restaurant and several cafes are located, someone trying to get us to go to their cafe walked up to us and said, habla espanol? (do you speak Spanish?), my mom answered and said no.

Then he said, do you speak English. And my mom said no. Our group of ten people from the US, England and Australia were all talking to each other, trying to figure out where to go and speaking English! So the sales guy goes yes, you speak English and then tries to sell us into going to his cafe. He said if we didn’t like it, we wouldn’t have to pay. Long story short, we went to Starbucks instead. Yes, in Peru.

I had an Algorrobina frappuccino that you can only have in Peru while in Cusco a few weeks before. This time, I had a manjar blanco frappuccino (also called dulce de leche) which I think you can only find in South America.

After saying goodbye, we headed to Miraflores, a neighborhood about 30 minutes away from the center of Lima. We stayed at an apartment and spent our last few days in Peru relaxing after the long overland tour.

We walked to a mall called Larcomar with this view (It was cloudy every day we were in Lima. I read that it’s always cloudy because of smog.):

We were surprised to see that TGI Fridays and Pinkberry were going to open soon at Larcomar! We were also surprised to find a Havanna cafe (my favorite cafe in South America)! I thought our visit to Havanna in Salta Argentina was our last time in a Havanna, but I guess not.

We got Frappes (Havanna’s version of Frappuccinos). One was maracuya y durazno (passion fruit and peach) which we also had in Buenos Aires a few months before! We also brought our laptops since there was WiFi to do some work.

The next day, we were on our way to Guayaquil Ecuador from Lima Peru on a 28 hour bus ride.

Have you been to Lima? What did you do there? Leave a comment below.