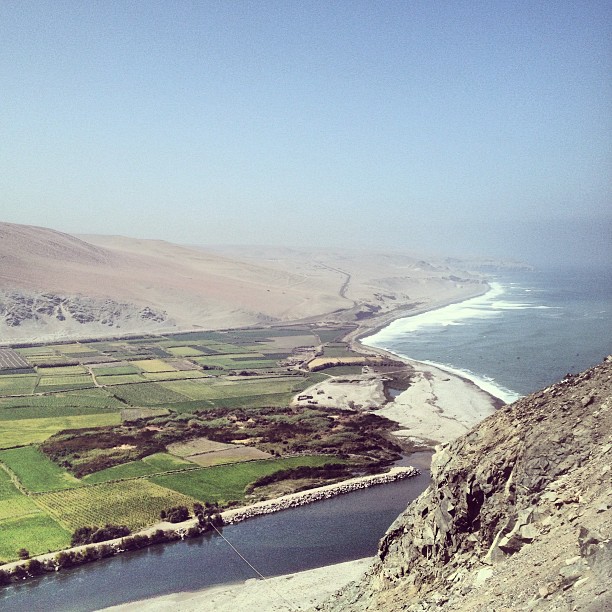 We saw the Atlantic Ocean while at Rio de Janeiro’s famous beaches like Copacabana and Ipanema. Over 40 days later after traveling only by land in an overland truck through Brazil, Paraguay, Bolivia and Peru, we finally saw the Pacific Ocean. We had our first glimpse (shown above) of the Pacific Ocean during the overland tour on our way to the capital of Peru, Lima.

But before arriving in Lima, we stopped for a night in Hotel Puerto Inka.

This is a hotel kind of in the middle of nowhere. We were driving on the roads when randomly we made a turn to dirt roads that led to this hotel that’s right on the beach. It is a hotel, but we camped on the beach.

This is the overland truck (it’s so big and yellow, it caught a lot of attention wherever we drove to- people would stare, some even took pictures!) and one of the tents:

There’s no WiFi at the hotel. The bathrooms and showers were the cleanest we had out of all the other campsites we had camped at in South America. The water used for the showers and sinks is half fresh water and half salt water. (So it tasted really weird when I brushed my teeth!)

A short walk away from where we camped are Inca ruins. We also saw some seals in the distance from our tents.

It was a really relaxing time at Puerto Inka. It wasn’t too cold compared to when we trekked in Peru. There was a colorful playground area with swings. I sat on the swings while reading an eBook on my iPhone and listening to the sound of the waves.

For dinner, our group had a barbeque! We had been traveling with these people all the way from Brazil to Paraguay to Bolivia and then Peru for over a month so we had great time eating and talking.

Then we roasted marshmallows:

This is a Vine video showing our camp fire and the sound of the ocean. We all sat around the fire for a long time then headed to our tents.

We actually got to sleep in a little (compared to other days when we had to get up every day at around 5:30 to 6 am).

Puerto Inka in the morning:

This is how we spent our first night on sea level after being in the high altitudes of Bolivia and several cities in Peru.

Where’s the best place you’ve camped? Leave a comment below.