I sat in my hotel room in the Fairmont San Francisco, staring out at the iconic Transamerica Pyramid. As I started browsing the room tablet for things to do, I came across a tour just for the hotel. There was an entire walking tour dedicated to the history of the very hotel I was sitting in.

I knew the hotel was an iconic destination not just for San Francisco, but as a historic landmark. So I set out to learn more and joined the tour.

Turns out the Fairmont San Francisco’s surrounding neighborhood of Nob Hill was home to the affluent population of the city in the 1800s, and even today with its high real estate prices. In fact, this is the namesake hotel of the entire Fairmont Hotel brand.

It was the first hotel in the US to have a concierge, the United Nations Charter was signed at the hotel in 1945, Tony Bennett sang I Left My Heart in San Francisco for the first time in the hotel’s Venetian room, and the Fairmont also stars as a fictional hotel in a TV drama series from the 1980s called Hotel.

I learned all these facts and also that afternoon tea, held at the Laurel Court has been served here since the hotel’s opening in 1907.

I could just picture women of the early 1900s with their best dresses on and chatting with friends under the dome. Today, there were various form of dress. 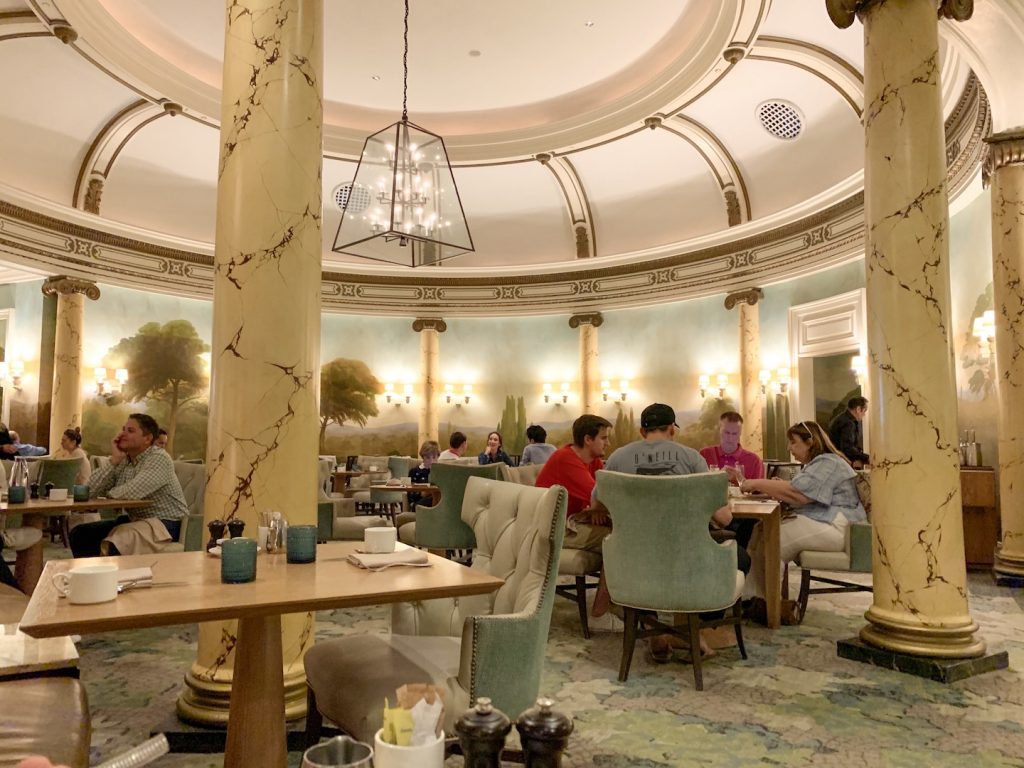 The Laurel Court is accessed right off the lobby. As you walk through the hotel’s front doors, walk directly straight and you’ll reach the restaurant. Since tea is only served on weekends, I can imagine it gets busy every weekend. Most tables surrounding us were full.

Fairmont Hotels has their own brand of tea called Lot 35, which they serve at the Fairmont San Francisco. They have a range of classics – earl grey, an oolong, green teas, a selection of herbal options and 1907 Orange Pekoe, a special black tea blend commemorating the opening of the first Fairmont Hotel in San Francisco. 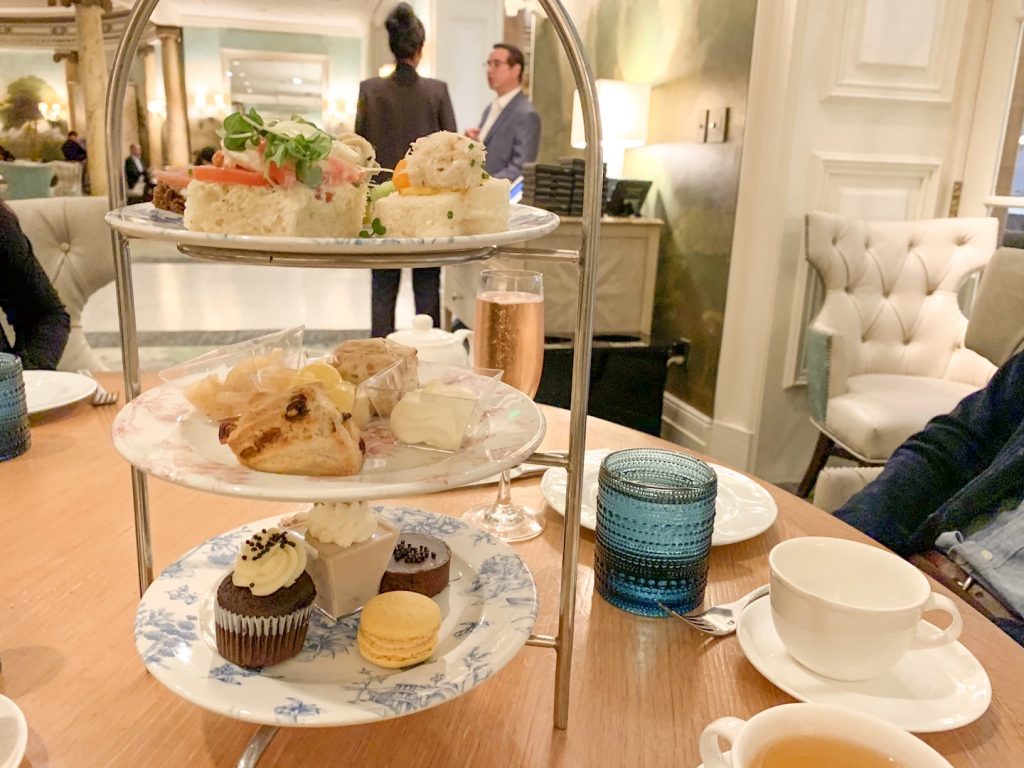 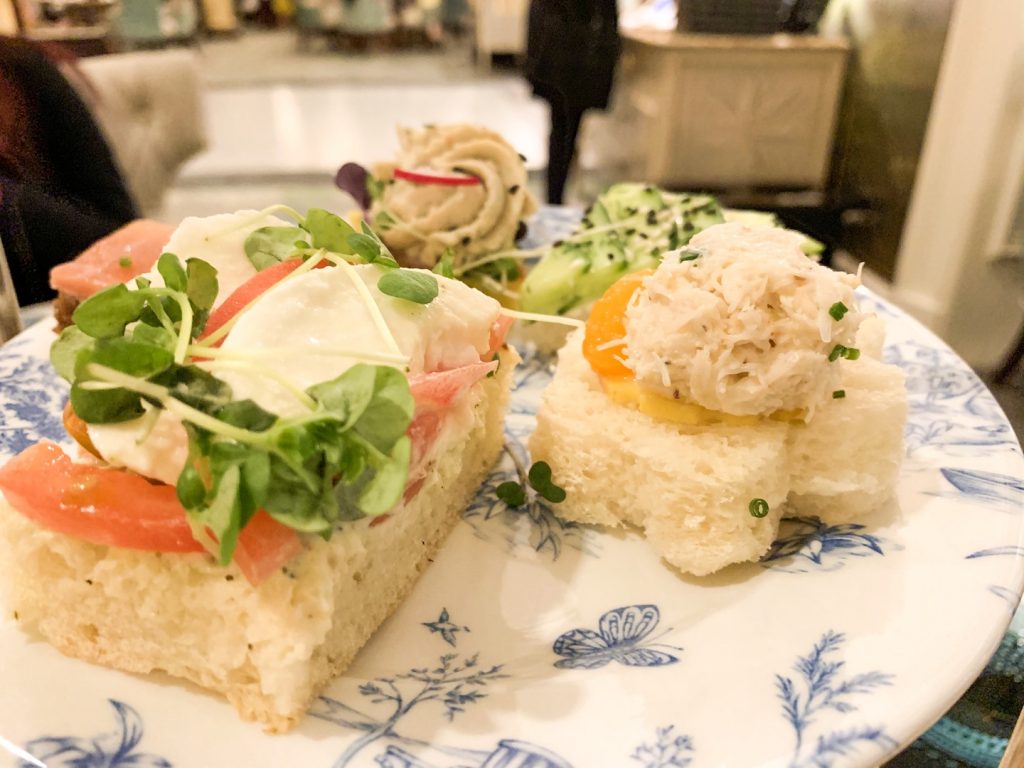 The Savory – (five varieties per person) 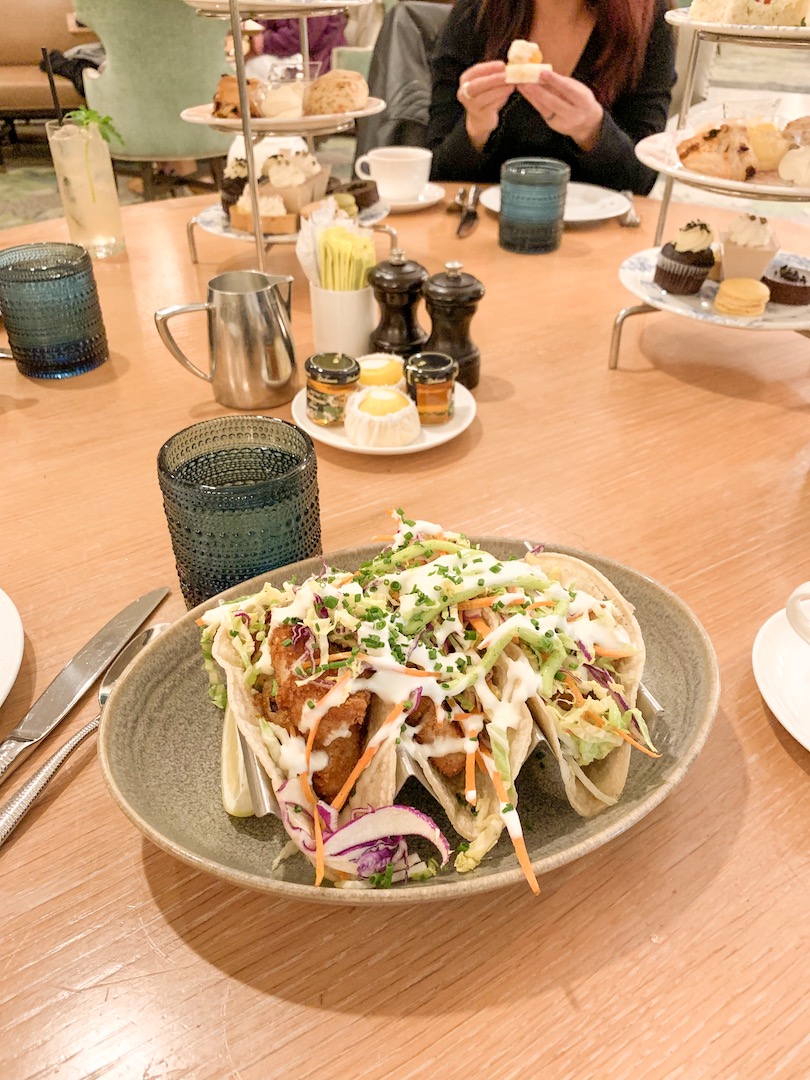 I had this afternoon tea right before my flight home so I wanted to have a proper lunch instead of a bunch of desserts. I ordered these delicious fish tacos, which you can also order off their lunch menu while at the Laurel Court.

The Scone – (two varieties per person)

Two flavored scones include blueberry and lemon and another with lavender and herb. These were served with lemon curd, Devonshire cream and a pear compote.

The Sweet – (five varieties per person)

Moving on the desserts, there was a nice variety of classics, like a macaron, chocolate cupcake, chocolate and lemon tarts and a mousse with pieces of chocolate mixed in.

Food came on a traditional three tiered afternoon tea tray with floral designs. Other china were classic white. Something didn’t feel right at first, when I realized most afternoon teas put their desserts on the top tier and savories on the bottom…

Service was ok, no complaints. We received everything in a timely manner.

Afternoon tea at the Fairmont San Francisco is another to add to my list of afternoon teas at Fairmont properties around the world (Fairmont Peace Hotel in Shanghai, Fairmont Royal Pavilion in Barbados, The Plaza Hotel (managed by Fairmont) in NYC).

Though I can’t compare this afternoon tea to others in San Francicso, I think it checks every point of a classic afternoon tea and also a good price, considering most afternoon teas at a hotel in NYC are at least $60.

Cost: $49 per person for Afternoon Tea

Tea Time: Saturdays and Sundays only from 1:30 – 3:30pm at Laurel Court at Fairmont San Francisco